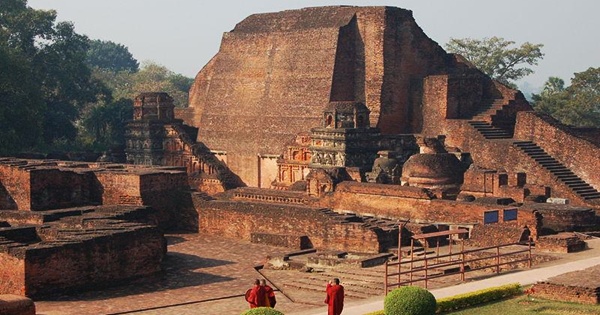 Nalanda University! The very utterance of this name will transport you to India’s ancient terrain of knowledge. This ancient center of higher learning, located in Bihar (in the ancient kingdom of Magadha), is India’s second oldest university after Takshila. Spread over an area of 14 hectares, it was a principal seat of learning from fifth century CE till (the Turkish invasion of) 1193, attracting students from as far as Tibet, China, Greece, and Persia.

All of the ancient Indian universities including Nalanda followed highly formalized methods of Vedic learning. It was the Guptas in the 5th century, who patronized university education, leading to the establishment of Nalanda University. A seal identifying a monarch named Shakraditya believed to be Kumaragupta I, a 5th-century Gupta emperor, is considered the founder of Nalanda.

While students from across the world enrolled for higher studies, there have been evidences of kings from foreign lands donating for the building of structures within the Nalanda University complex. There is archaeological evidence of a Shailendra king of Indonesia who built a structure within the campus. Nalanda University was a residential seat of learning and the campus contained 10 temples, classrooms, meditation halls, monasteries, dormitories, etc. including lakes and parks spread across eight compounds. The university accommodated over 10,000 students and 2,000 teachers.

According to accounts by pilgrim monks from East Asia and other historians, the curriculum in Nalanda University included study of Mahayana Buddhism, the Vedas, Logic, Sanskrit Grammar, Medicine, Samkhya, and more subjects on every field of learning.

Nalanda was ransacked and destroyed by Turkish Muslim invaders, also called Mamluks, under Bakhtiyar Khilji in 1193 AD. The great library of Nalanda University was so vast that it is reported to have housed more than 9 million manuscripts. According to traditional Tibetan sources, the library at Nalanda University was spread over three large multi-storeyed buildings. One of these buildings had nine storeys that housed the most sacred manuscripts. The library burned for three months after the invaders set fire to the buildings. The Muslim invaders ransacked and destroyed the monasteries and drove the monks from the site.

Bakhtiyar Khilji, a chieftain, was in the service of a commander in Awadh. The Persian historian, Minhaj-i-Siraj in his book Tabaqat-i Nasiri, recorded his deeds a few decades later. Khilji was assigned two villages on the border of Bihar which had become a political no-man’s land. Sensing an opportunity, he began a series of successful plundering raids into Bihar. He was recognized and rewarded for his efforts by his superiors. Emboldened, Khilji decided to attack a fort in Bihar and was able to successfully capture it, looting it of a great booty. 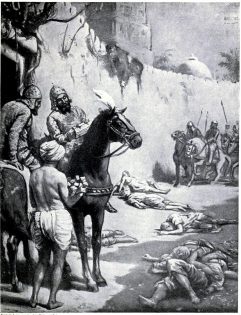 Barbarian Khilji in a painting from Hutchinson’s ‘Story of the Nations’. It depicts Khilji trying to make sense of a manuscript. Source: Wikipedia

Minhaj-i-Siraj wrote of this attack: “Muhammad-i-Bakht-yar, by the force of his intrepidity, threw himself into the postern of the gateway of the place, and they captured the fortress, and acquired great booty. The greater number of the inhabitants of that place were Brahmans, and the whole of those Brahmans had their heads shaven; and they were all slain. There were a great number of books there; and, when all these books came under the observation of the Musalmans, they summoned a number of Hindus that they might give them information respecting the import of those books; but the whole of the Hindus had been killed. On becoming acquainted [with the contents of those books], it was found that the whole of that fortress and city was a college, and in the Hindui tongue, they call a college Bihar.”

Minhaj-i-Siraj also wrote in his book Tabaquat-I-Nasiri about thousands of monks being burned alive and thousands beheaded as Khilji tried his best to uproot Buddhism and plant Islam by the sword. The burning of the library continued for several months and ‘smoke from the burning manuscripts hung for days like a dark pall over the low hills.’ 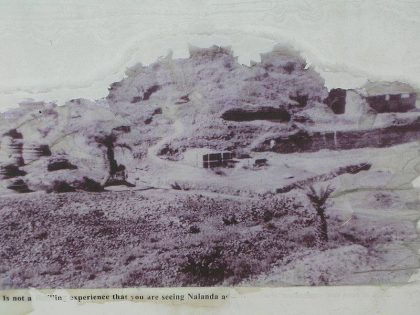 According to another historical source, Rahul Sri Bhadra, a Buddhist scholar of Ayurveda treated Bakhtiyar Khilji for an illness which was deemed incurable by his court Haqims. Disturbed by the fact that an Indian scholar and teacher knew more than the Haqims of his own court, Khilji decided to destroy the roots of all knowledge and Ayurveda in this country. So he set fire to the Great Library of Nalanda and burned down 9 million manuscripts!

The last throne-holder of Nalanda, Shakyashribhadra, fled to Tibet in 1204 CE at the invitation of the Tibetan translator Tropu Lotsawa (Khro-phu Lo-tsa-ba Byams-pa dpal). In Tibet he started an ordination lineage of the Mulasarvastivadin lineage to complement the two existing ones.

When the Tibetan translator Chag Lotsawa (Chag Lo-tsa-ba, 1197–1264) visited the site in 1235, he found it damaged and looted, with a 90-year-old teacher, Rahula Shribhadra, instructing a class of about 70 students. During Chag Lotsawa’s time, there was an incursion by Turkish soldiers that caused the remaining students to flee. Despite all this, “remnants of the debilitated Buddhist community continued to struggle on under scare resources until c. 1400 CE when Chagalaraja was reportedly the last king to have patronized Nalanda.”

Author Shri D.C. Ahir considers the destruction of the temples, monasteries, centers of learning at Nalanda and northern India to be responsible for the demise of ancient Indian scientific thought in mathematics, astronomy, alchemy, and anatomy. Most of the manuscripts burnt contained valuable inputs on these subjects.

Disclaimer: The views expressed here are solely of the author. My India My Glory does not assume any responsibility for the validity or information shared in this article by the author.

Related Post: Bhaskaracharya, not Newton, Discovered Law of Gravitation; Clue of Gravity in 6000 BC ‘Prashnopanishad’